Last weekend, I attended Louisville’s second annual Imaginarium Convention for creative writers (and readers). I went last year, too, and have had a blast both times. Great programming, great networking, and great company. Plus, it’s held in the same hotel where the long-gone Rivercon Science Fiction Convention used to be held, which means it brings back great memories for me of attending my very first convention with my mom, 23 years ago. I’ve decided that I need a reversible hat to wear next year, with editor on one side and writer on the other, so people will know from which point of view I’m speaking.

This year, I was on 5 panels: one about the role of an editor; one about the writer-editor relationship (and how the editor is, in fact, your friend, even if they put enough red on your manuscript that it would never make it past Hollywood censorship); one about choosing and pulling off either a lone hero tale or a heroic group story (which, ironically, had neither a lone hero for a speaker nor a heroic group of speakers, but yet a third narrative choice: a dynamic duo of speakers); a panel about steampunk (which was lots of fun, and in which we discussed various other ‘punks, too, such as deiselpunk, clockpunk, etc.); and a panel about plotting, and how different writers do it (or don’t). So now you know the kinds of things writers sit around and talk about in secret.

I also attended a couple of panels as an audience member – one about balancing a day job and a writing schedule (because it ain’t easy getting back into a routine after four years away from creative writing), one about writing non-human characters (because the sequel to Erica Flynn includes some), and one about writing the zombie apocalypse (because two of my editing clients do). There were a bunch more I *wanted* to attend, but they were at the same times as the panels I was speaking on. These included, but weren’t limited to, panels on historical writing, unconventional fantasy, and comic books. As you can see, there’s a pretty good variety of topics at Imaginarium, which is one of the reasons I love it! Plus, they had a dragon this year. I mean, how can I not love it?

If I could change one thing about Imaginarium, it would be to add a tea/coffee room for the convention, so there would be a hangout spot to just shoot the shit with other writers. Because writers, myself included, love nothing better than to shoot the shit over caffeinated beverages! 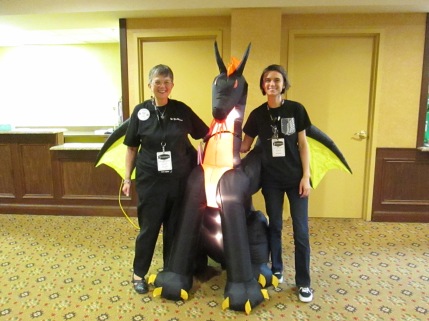 Mom, the dragon, and me