I don’t know how much of what I’ve written this week I’ll end up keeping vs. cutting. I finished a chapter tonight which may well be completely replaced. But I’m not sorry I wrote it, because 1. I enjoyed writing it, and 2. it gave one of my characters room to open up on the page–not that I didn’t already know certain things about him, but just like with real people, it’s one thing to know a character, and another thing to really empathize with them, to feel what it’s like inside their head. Whether the scene is integral enough to the plot of the novel or not to keep it remains to be seen, along with whether or not it’s anything a reader would care to sit through when there are much more adventurous moments to be had in the book. In a first draft, you can’t worry about that kind of stuff, or you’ll never finish. Be generous with your first draft and ruthless with your second, I always say. Or, in other words, write the first draft as a writer and the second as an editor. 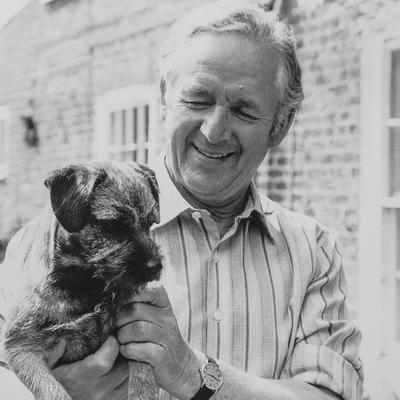 And speaking of writing, I just finished re-watching the excellent BBC series All Creatures Great and Small, based on the autobiographical books of a Yorkshire veterinarian. The books were written under the pseudonym of James Herriot, real name Alfred Wight. I grew up on his books, which both my mother and my grandmother read to me as a child, and on the BBC television series which aired on PBS when I was little. The time period is the 1930s-50s, the setting rural Yorkshire, the style funny and touching by turns, and the characters (both human and animal) portrayed with a beautiful balance between honesty and compassion in the narrative. Herriot’s (or rather, Wight’s) stories are as ingrained in me as if they were the mythos of my personal culture. So when I finished the series and sat down to check out the special features, I was thrilled to come across a 1970s interview with the author.

There were several things in the interview that particularly struck me. First, Wight spent twenty years saying he was going to write a book before, at age 50, he ever attempted the task. He described his struggles with learning to write from the heart, rather than trying to write “well,” with finding his own voice in the shadow of the literary classics he loved. And then his struggles with rejection letters and the inevitable depression that accompanies their repetition, disasters like having an editor who liked his work but asked him for rewrites leave for another company by the time he did the rewrites, and a host of other obstacles. And yet, he ended up with one bestseller after another, translations into languages for readers all over the world, and a TV series on the BBC.

Second, I was struck by the accuracy of his portrayal of himself and his wife, and their relationship, based on the books in comparison to things he said in the interview. It can’t possibly be easy to portray anything that close to home without skewing it. And I’m sure there’s some of that, but it made me smile to see him act so much like the James Herriot I knew from his books.

Third, the interviewer asked several times, in different wording each time, why a multi-national bestselling author was, at that time, still working full time as a country vet. Wight’s answer: He loved being a vet, his love of being a vet is what he writes about, and he felt it was important to balance his writing life with the activity his career provided him with. All of which just makes me love his books more, because of the depth of his feeling for his work with animals–and the people who care for them. But that third component, balancing creativity with daily life, struck me in particular. It’s something all but the most successful writer struggles with: balancing a day job with writing. And yet, here’s an author who could easily have lived on his sales, who felt that without his day job (if you can call a job where you’re on call 24/7 a “day job”), he wouldn’t have been as productive as a writer. Granted, he wrote about what he did for a living. But still, it’s a point to ponder. We tell ourselves we need time to write, but is it time we need, or is it motivation, self-discipline, and drive?

For my own part, if I’m honest, it’s the latter. Thank you for the reminder, “Mr. Herriot”!

Did I finish National Novel Writing Month (November) with a 50,000 page manuscript, as challenged? No! Am I upset about that? No! Did I get a lot of writing done? Yes! Did I make a lot of progress on my novel this month? Yes! Did I write some awesome scenes? Yes! Am I going to finish this novel now that November is over? Yes! Can I finish the draft, as planned, by the end of 2015? Probably!

Thoughts:
I found NaNo to be very helpful in pushing through tough spots (like transitions, parts with unclear direction, etc.) in my manuscript. Trying to write 1,667 words per day means forcing your way through to the good stuff. And a lot of the time, if you just keep going, you can push through to getting on a roll. Sometimes not so much, but it’s worth trying.

I found NaNo to be incredibly helpful in re-learning the art of prioritizing writing. Literally just keeping it in mind that you’re going to do some work on your novel every day makes a big difference – even if, like me, your schedule changes daily and you can’t set aside, say, from 9-10 pm each night or from 7-8 each morning to write (not that I’m ever voluntarily awake at 7 am). Aside from the time you actually spend sitting down and writing, knowing that it’s going to be part of your day kicks your brain in gear to think about it all day. What am I going to do next? you’ll wonder when you wake up in the morning. And What if I made this happen? you’ll think as you spill coffee all over your hand, distracted as visions of your characters dance in your head. It’s a beautiful feeling to take with you as you go about your daily life.

Since it isn’t always possible to sit down for five hours at a stretch and pump out 1,667 words every day, I was surprised to find how quickly I can sit down and knock out 500-700 words. Do that a few times a day, and you’re gold for a NaNo day. Do that a few times a day any day, and you’ve accomplished a lot. So maybe it’s good that I don’t have a set writing time. Maybe it works better to write a bit when I come home, then have din-din, then come back to my writing for a while, and then spend some quality time with my fella and my chinchilla. Got an hour between things? Don’t play Plants vs. Zombies II – write 500 words! Got 20 minutes before you’re meeting your friends for drinks? Don’t check Facebook another 12 times – write 250 words! DO IT, and don’t be intimidated by time constraints.

And breaks are good. Throwing myself at my book at a breakneck pace all month just didn’t turn out to be what I wanted. It felt really good, I got a lot done, but when it started feeling like writing a panicked term paper instead of creating a work of fiction, I didn’t feel bad about finding some balance. Getting away and doing something else gives you a chance to re-assess where you are and what you’re doing in the plot and in the characters. You see something or you have a conversation with someone or you just get some perspective, and you find a new level of inspiration, a new direction to take things, a new way to approach that boring, awkward transition scene. Taking a break also helps keep me excited about the book – I’m eager to get back to it if I take a day off, or if I get out and do something with other humans (gasp!) for a few hours.

My goal now is to finish this rough draft by the end of December. During NaNo, I generally felt the best at around 1,000 words per day, so I’m going for that to finish out the year. And yeah, I’ll take days off, probably, and I’ll write more some days. Will I do NaNoWriMo next year? Depends on what’s cookin’, but I think so, yeah! Whether I finish or not, it’s been worth it to participate.

There is a sneaking worry that every writer who can’t afford to be a full-time Writer gets when other life pursuits take the front seat for an extended period of time….  Am I still a writer if I’m not writing?  Every once in a while, since I started back to school, this thought creeps into my head – even now that I have a publishing contract – and not updating my blog for months at a time is one result of that.

But my answer to this doubt is, Yes, I am still a writer, because I am still building up ideas and plots, and I will still put them together and down on paper.  Also, there is a part of my brain that is now hard-wired to store away odd bits of information from every source (classes included) for the construction of storylines and weird characters.  I’ve mentioned here before that I have plans for a follow-up to The Life and Death (But Mostly the Death) of Erica Flynn.  The ideas all clicked into place for the new novel while I was in my Introduction to Eastern Religions class.  Since, like Erica Flynn, my new main character will also experience death as a major turning point rather than an end, I’m sure the realities of death that I’ve learned about in my two courses on Skeletal Forensics (and at the lab looking over actual skeletons and burial records) are going to affect the way I portray death in the new novel.

The thing is, I think it’s expected of writers (and we writers do it to ourselves) to define themselves not only primarily, but almost exclusively as Writers (or authors, if we’re lucky!)  Or maybe it’s just me – because I know that my own satisfaction with myself as a person has consistently hinged on whether or not I was working on a book.  When I wasn’t writing, I felt bad about my life and myself, and when I was writing, I felt pretty positive and self-assured.  Writing is what I enjoy most and what I feel I’m best at, where I’m most in my element (possible exception:  tromping around the woods).  But in branching out and putting my life focus on other things (study, a career, opportunities related to study and career) I’m tremendously excited about the possibilities not only for my other pursuits, but also for the possibilities this opens up for my writing!  It has to be on the back burner for the moment, coming in third on my priorities after school and survival (yes, school comes before survival on my list,) but it’s going to be so much the better for all the new experiences I’ll have to draw from.